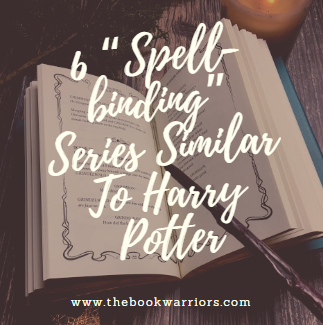 I love Harry Potter. Who doesn’t? I’ve read the series more times than I would like to admit, but who’s counting? Also, if you follow me on Instagram, you probably know that over half of my Instagram feed is filled with Harry Potter themed photos. The Harry Potter series will always have a special place in my heart.

Unfortunately, I can’t spend the rest of my reading life rereading the Harry Potter series again and again, because I want to read something new! So, I took on a mission to find good books/series similar to Harry Potter, which is also a mission to add more books to my never ending TBR pile. How fun! 😉

Here are a few of my recent Harry Potter pictures on my Instagram page, @thebookwarriors:

Happy #flashbackfriday and #gryffindorprideday!!! . This is my first post ever. I thought I would post it since I recently hit 200 followers and it shows some Gryffindor #housepride too!! . Which Hogwarts house do you belong too? Tag your favorite Gryffindor!! . #bookstagram #bibliophile #harry #potter #harrypotter #jkrowling #bookstagramfeature #bookstagramchallenge #books #bookstagrammer #biblio #bookoholic #booktography #bookish #bookworm #bookaholic #books #wand #amazingauthor #jkrowlingswizardingworld #favoriteread #halloween #goodread #costume #magic #magical #harryronhermione

Happy #flashbackfriday and #gryffindorprideday!!! . This is my first post ever. I thought I would post it since I recently hit 200 followers and it shows some Gryffindor #housepride too!! . Which Hogwarts house do you belong too? Tag your favorite Gryffindor!! . #bookstagram #bibliophile #harry #potter #harrypotter #jkrowling #bookstagramfeature #bookstagramchallenge #books #bookstagrammer #biblio #bookoholic #booktography #bookish #bookworm #bookaholic #books #wand #amazingauthor #jkrowlingswizardingworld #favoriteread #halloween #goodread #costume #magic #magical #harryronhermione

Happy #throwbacktuesday!! How has your day been? . I’ve been swamped with homework because it’s my first day back since Yosemite. 😭😭😭 All of my teachers decided that it’s a good day to assign new projects all due at the end of the week. #thestruggles . I was looking through my old photos, and I came across this photo. This is my favorite photo that I have taken for this account. Do you have favorite photos on your feed? . Regular fairy lights from @michaelsstores and star fairy lights from @target. . #instabook #instareads #igreads #epicreads #booklife #biblio #bibliophile #read #reading #reader #readers #booklove #booklover #booklovers #bookish #ilovebooks #bookaholic #bookaddict #bookgeek #booknerd #totalbooknerd #bookphotography #kimmersbooks

Happy #stacksaturday!! I’m sorry that I haven’t been active the whole week. I was at Yosemite for a school trip. Don’t worry I’ll be active and post pictures soon! I’m also doing #flashbackfriday, and I tried to retake an old photo. I hope I’m improving my photography through this account… . What do you all think? Is it better or worse? . #books #bookstagram #bookstagrammer #instabook #instareads #igreads #epicreads #booklife #biblio #bibliophile #read #reading #reader #readers #booklove #booklover #booklovers #bookish #ilovebooks #bookaholic #bookaddict #bookgeek #booknerd #totalbooknerd #bookphotography #kimmersbooks

What is your favorite bookish merch? . I have so much Harry Potter merch, and it is really hard to decide what my favorite merch is. I have really cute figurines, a variety of key chains, a wand, a pair of Harry Potter’s glasses, and the Gryffindor tie. . What is your favorite bookish merch? . Challenges: #thebookwarriorsfebruary . #harrypotter #hogwarts #bookishmerch #art #hp #ronweasley #potterhead #slytherin #gryffindor #hermionegranger #ravenclaw #jkrowling #cute #magic #dracomalfoy #dumbledore #potter #bhfyp

It’s time for some #housepride !! . What’s your Hogwarts house? . I took the Pottermore quiz twice, and the first time I got Gryffindor, and the second time I got Hufflepuff… But according to Dumbledore, “It is our choices, Harry, that show what we truly are, far more than our abilities.” So I’m sure that also applies to me. I choose Gryffindor. I just used wisdom given from a Gryffindor to choose Gryffindor. 🤯🤯 . What is your Hogwarts house(s)? . Challenges: #thebookwarriorsfebruary . #books #bookstagram #bookstagrammer #instabook #instareads #igreads #epicreads #booklife #biblio #bibliophile #read #reading #reader #readers #booklove #booklover #bookaholic #bookaddict #bookgeek #booknerd #totalbooknerd #bookphotography #harrypotter #harrypotterdiy

🌟 QOTD 🌟 What is your favorite bookish DIY that you have ever done?? . I haven’t done too many bookish DIYs (another thing to do in 2019 😬😬), but my favorite by far is my cardboard Happee Birthdae cake box. I did it in the summer as a little project to celebrate Harry Potter’s ‘Birthdae’!! This is a pretty cute idea to put a Potterhead’s gift in it! I’m pretty happy with the results because I hadn’t ever done anything like that. . Materials – cardboard – light pink paint – light green paint – hot glue – parchment paper . Instructions 1. Construct a circular box with cardboard. You can also buy a ready made circular box. 2. Paint it light pink. 3. On parchment paper, using the hot glue gun, carefully write the words “Happee Birthdae Harry”. This can also be customized if you are giving it as a gift. 4. Once the glue has set, paint the letters light green. Let it dry. 5. Using more hot glue, glue the dried and set letters to the box. You need to be careful here because if the glue is too hot, the letters melt and deform. 6. Once everything is dry, add anything you want into the box. Good gift ideas could be: Harry Potter keychains, earrings, candy, maybe even a cupcake! Enjoy! . Challenges: #thebookwarriorsfebruary . #books #bookstagram #bookstagrammer #instabook #instareads #igreads #epicreads #booklife #biblio #bibliophile #read #reading #reader #readers #booklove #booklover #bookaholic #bookaddict #bookgeek #booknerd #totalbooknerd #bookphotography #diy #diycrafts #harrypotter #harrypotterdiy

Happy Friday! What are your plans for the weekend? . I’m finally getting to read the Crimes of Grindewald Screenplay! I still can’t get over how pretty the book is and I’m so excited to read it. . Which Fantastic Beasts movie was your favorite, 1 or 2? . Challenges: #thebookwarriorsfebruary . #books #booksofinstagram #bookstagram #bookstagrammer #instabook #instareads #igreads #epicreads #booklife #biblio #bibliophile #read #reading #reader #readers #booklove #booklover #booklovers #bookish #winterreads #winter #february #bookaholic #bookaddict #booknerd #bookphotography #februarychallenge #openbook

So I clearly love Harry Potter. Those are just a few of my recent Harry Potter themed pictures on my Instagram page. To see the rest of my photos and keep up to date for future photos and posts, you can hit the “Follow” button @thebookwarriors. Also, if you have any photos you would like to share with me, feel free to use #thebookwarriors or tag me! I would love to see the photos!

That Faithful Day, 6 Years Ago…

So a little history on my reading habits…

I have been a avid reader for my whole life. Back in kindergarten and lower elementary school, I read series like Geronimo Stilton, Nancy Drew and the Clue Crew, Magic Tree House, and Katie Kazoo. I literally couldn’t get enough of those books. I remember my second grade teacher banned Geronimo Stilton books in my class, because everyone was reading those, and nothing new. That was a very sad time for all of us, as second graders. 🙁

But, 6 years ago I started something magical. I bet you can’t guess what that magical thing was… 😉 Yup, that’s right, I started the Harry Potter series by J.K. Rowling! And the rest is history…

I have read the Harry Potter series way too many times, but who’s counting? Harry Potter will never get old for me. 🙂 Fast forward a little, and I took on my mission. I was hoping to find new fantasy series similar to Harry Potter and not leaving me disappointed. The last part was the biggest challenge because Harry Potter has left my expectations very high.

Below, I listed some series similar to Harry Potter. Though Harry Potter is one-of-a-kind and unique, these series are definitely pretty good.

How it’s similar: Just like Harry Potter uses magic, this series incorporates mythology into everyday life and has a special camp for “half-bloods” (instead of a school for witches and wizards).

What I like about it: I like how it is less serious than Harry Potter, with humor incorporated throughout the book. It is also fast-paced and very adventurous.

How it’s similar: The Maze Runner is just like the 3rd task in the Triwizard tournament – the maze. There are many adventures within both mazes and throughout both series.

What I like about it: I like how this book is fast-paced and very adventurous. Both series take unexpected twists and turns that I wasn’t expecting.

How it’s similar: Just like Hogwarts, the school of witchcraft and wizardry, Fairy Tale Reform School is a magical school where children are reformed. Both schools have their share of adventures.

What I like about it: I like how the villains are teachers at Fairy Tale Reform School. It shows that some pretty mean villains can be reformed and be good and help others learn those values too.

Land of Stories by Chris Colfer 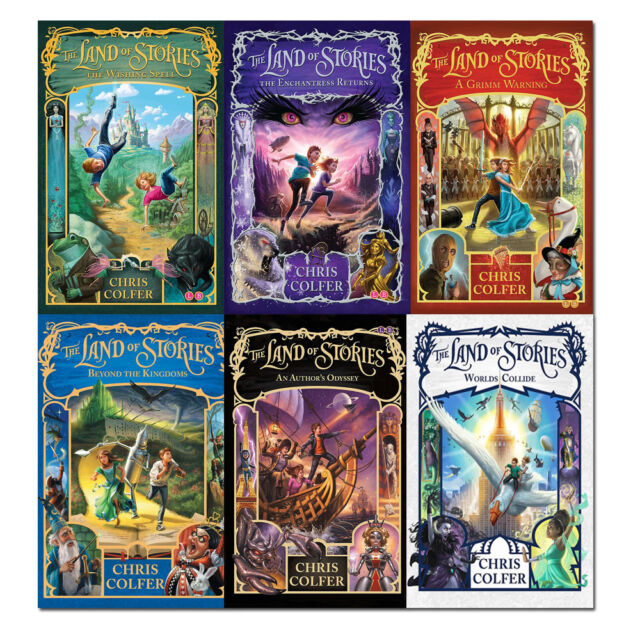 How it’s similar: Land of Stories is a world where fairy tales are real. Like Harry Potter, everyone knows magic and there are all sorts of different animals there such as talking animals, fairies, unicorns, and more.

What I like about it: I like how it tells you what happens to characters in classic fairy tales after “happily ever after”. For example, after the Big Bad Wolf fiasco, Red Riding Hood becomes queen with her very own kingdom!

How it’s similar: In the world of Hunger Games,  the Capitol of Panem is divided into 12 districts (like Hogwarts is divided into houses). Tributes, a boy and a girl are forcibly selected to compete in an event which is a fight to death,  called the Hunger Games. It is pretty similar to the Triwizard tournament.

What I like about it: The ending is pretty unexpected, and I like the main protagonist is a girl. She is a strong, fierce girl that doesn’t cry every time she breaks a nail, and doesn’t wait to be rescued by a boy. She reminds me of Hermione.

How it’s similar: Just like Hogwarts is divided into houses, in the Divergent series, the society is divided into factions based on their personality. Some societies have rivalries just like Gryffindor and Slytherin. Through both series, many adventures occur.

What I like about it: I like how the series is fast-paced and like Hunger Games, the main protagonist is a girl.  Also, I like that the characters are realistic and don’t always fit into their faction.

Of course, Harry Potter is probably one of the best series that I have ever read. Like I said before, I will never read it too many times, and it won’t ever get old for me. But, as readers, we do have to consider some other options. There are series similar to Harry Potter out there, and I think that these are some good ones.

Which “spellbinding” books or series similar to Harry Potter do you like? Let me know in the comments below or tag me @thebookwarriors on Instagram.