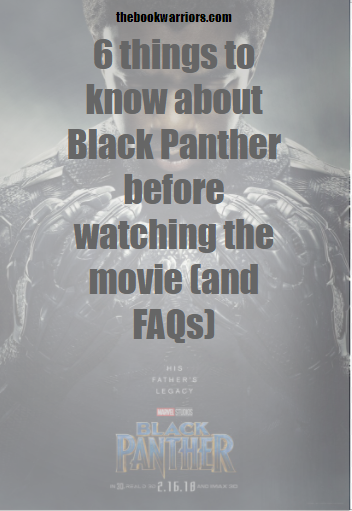 On Friday, February 16, 2018 Black Panther will come out! As a huge Marvel fan, I’m so excited about the movie and I can imagine so is everyone else. In case you are new to Marvel, and want to catch up so that you can watch this movie, here are some quick facts and FAQs to know about Black Panther before watching the movie:

6 things to know about Black Panther before watching the movie

1. He is a king. Blank Panther was the Prince of Wakanda. But when his father was killed in a bomb attack, he became king of Wakanda. He is one of the few Marvel characters that isn’t just an ordinary man without his suit. He is the king of Wakanda.
2. His first appearance in a movie was Marvel’s Captain America Civil War. I highly recommend that you watch Captain America Civil War first because there was some character build up for Black Panther in that movie.
3. He is from Wakanda. Wakanda is a fictional nation in North East Africa. So what’s the big deal about Wakanda? Well, it’s an advanced nation in science and technology. They are rich in vibranium, which is the same rare metal, that Captain America’s shield is made of.
4. His real name is T’Challa. His character’s name isn’t Black Panther. It’s T’Challa. Black Panther is his superhero name.
5. His suit is made of vibranium. His suit is made of an almost indestructible metal. I’m sure we will discover more about his suit’s powers in the movie.
6. His superpowers include: His strength gets a boost from a mystical herb, grown in Wakanda, that only a true Black Panther can use. His suit is made of Vibranium, is bulletproof and absorbs impact. He can climb walls too.

Vibranium is a fictional rare metal that absorbs impact. Captain America’s shield and Black Panther’s suit are built out of vibranium. It is a near indestructible metal.

No, Wakanda is not real. It is a fictional nation or kingdom set up in the mountains of North East Africa, known for their large resource of Vibranium.

POSSIBLE SPOILERS BELOW
Why was Black Panther against Bucky?

Black Panther thought that Bucky was responsible for the bombing that killed his father. He was trying to get revenge through Captain America Civil War, until he found out the Bucky was framed.

Who are his enemies?

His foe enemies are many villains in Fantastic Four, including Magneto and Doctor Doom. Also, Man-Ape and Klaw are some more in his list of enemies.